In 1856 the first frame building church was built on land still owned by the parish. From these beginnings, we have seen this parish grow from a struggling Mission Church to the large parish it is today. From that frame church there came a beautiful church, a large school, a convent, a rectory/parish office and a parish center, but even more important than the buildings, from that mere handful of dedicated Catholics, the parish has grown to become one of the outstanding parishes in the Springfield Diocese. Our parish continues to grow spiritually and physically. In the early years of the 1850’s, the Catholics who settled in Collinsville were few in numbers, but they were strong in the practice of their faith. They resolved to build a church, even though they knew they could not have a resident priest. Mass for a time was said by a visiting priest in the home of Octavius Lumaghi, one of the first families to settle in Collinsville. In 1856 the frame church was built, and priests came weekly from East St Louis to care for the spiritual needs of the people.

In November of 1857, Bishop Henry D. Juncher, the first Bishop of Alton, sent Father W. Repis to Collinsville to be the first resident pastor. In 1862 Father J.N. Pettitt, was appointed pastor. Father F.J. Fisher, during whose administration the first two bells were blessed and installed in the church, succeeded him. In 1863, Father Rustige bought the first ground for the cemetery. In 1867 lots adjoining the church were purchased from D. D. Collins, one of the founders of Collinsville, for about $3,600.00.

In August of 1879 the bishop appointed Father Henry B. Degenhardt, a newly ordained priest, pastor. He spent the next thirty-one years here in that capacity. Father Degenhardt’s mission was to build a new and larger church, as well as a new school. The school was started in his first year here. From 1879 to 1884 secular teachers were employed. In 1884 the Ursuline Sisters from Alton arrived to take charge of the school. From that day to the mid 1990’s the Ursulines continued to bring the finest in education to the children.   The new church was partially built in 1880. For ten years there remained only the sanctuary and the transept. In 1890 the nave and the steeple were added. In 1894 it became evident that a larger school was needed and in the spring of 1895 the school was completed. On Easter Monday of that year the Most Rev. James Ryan, the third and last Bishop of Alton, dedicated it. Some years later three large classrooms and an auditorium were added. In 1920 Father Degenhardt was replaced by Father Francis Marke.

In July of 1933 Father B.N. Manning began his apostolic work by bringing back many people to the “Faith of our Fathers”. Father Manning’s accomplishments were paying off the parish debt, repairs of the rectory, church and the buying of ground for the parish center, and the buying of a home for the sisters. In 1937 Father Manning began a Convert Class in Maryville and adopted both of these communities as Mission Parishes. On April 17, 1938 the first Mass in Maryville was said in a converted movie theatre on Easter Sunday. In June of 1950 Maryville became a parish with State Park as its Mission. In 1950 Monsignor Manning recognized the need for a Parish Center. In May 1953, The Most Rev. William A. O’Connor D.D., the Bishop of Springfield, dedicated the Parish Center. In 1956 it was determined that a new school was needed to meet the needs of the parishioners. On October 14, 1956, the church looked back upon One Hundred Years of Catholic life and Parish activity in the City of Collinsville. On November 25, 1957 Monsignor Manning died and was buried from the parish church on November 29. During that same year ground was broken for a new school. On January 14, 1958, Monsignor Eagear was appointed pastor of SS. Peter and Paul. The new school was opened on September 2, 1958 and dedicated by Bishop William A. O’Connor D.D. on November 2, 1958. 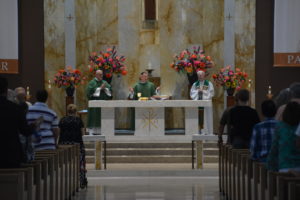 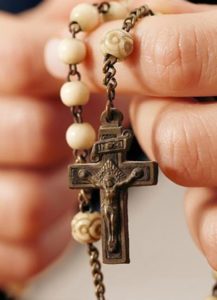